The Dance Alive National Ballet opened up its new season with “Meet the Dancers” at the Cade Museum  on Oct. 6th, offering a taste of the diverse performances the professional group will display through spring.

The glass doors of the Cade Museum for Creativity + Invention open to a fizzing crowd, with hors d’oeuvres and petite wine spritzers about the room. From the second floor, Thomas Swanson and Quinn Bass of Pristine Stringz send harmonies of tingling piano keys and the whine of a violin tumbling down the winding staircase. Dance Alive National Ballet artistic director Kim Tuttle and choreographer-in-residence, Judy Skinner, circulate the room, warmly embracing friends who have supported the ballet company that their mother started over 50 years ago.

For nearly 40 years, Tuttle and Skinner have worked at the helm of the nonprofit organization, fostering relationships with dancers, choreographers and other artists from all over the world to enrich Gainesville’s arts community.

The museum sets a refreshing tone for this year’s “Meet the Dancers” event, foreshadowing some of the cutting-edge works the professional company will perform for its 2017/2018 season. A few performances in particular are sneak peeks of the works the dancers will perform on Oct. 26th at the Phillip’s Center for “Aspire,” which counts as part of the “Good Life” course in conjunction with the University of Florida humanities department. Woven through each performance in the four-part show, will be the theme of the “good life.”

During the cocktail hour, guests play with a physics exhibit on the second floor, tinkering with xylophone keys and other gadgets. Meanwhile, the 2017/2018 professional dancers warm up in a room tucked away from the bustling chatter on the first floor.

While all the dancers have exquisite technique rooted in classical ballet training, their varying countries of origin, from Russia, Ukraine, Brazil and Cuba, gift them each with styles that differ slightly from one another.

“It is good to train with dancers who come from different training backgrounds,” principal dancer Ashley Brooke Lunn said, “because you can see different sides and learn different things, or take a little bit from each dancer and make it your own.”

Two new members have joined the professional team, Aaron Gomez, formerly of the National Ballet of Cuba, and Rachel Ridley, who grew up taking classes at the Dance Alive headquarters, Pofahl Studios, and returned to Gainesville after attending USF in Tampa. As she wraps up her degree online, she dances alongside some of the professionals who helped mold her technique as a ballerina.

Each of the 16 dancers performs principal roles in the various performances that the company debuts across the state and beyond. While the company has been on the state touring roster for over 40 years, it has also traveled to venues abroad, such as Monaco, where they performed for Prince Albert II in 2011.

As the cocktail hour diffuses, patrons take their seats in front of the dance floor to participate in an auction before the dancers grace the stage. Bids are placed on a range of exclusive activities, from performing as “Mother Ginger” during a Nutcracker performance in December, to a trip for two to Monaco, which would include meeting Prince Albert II.

The funds raised will be used to help cover a range of expenses, from pointe shoes, (which cost $100 per pair), to dancers’ salaries.

“We like to encourage growth from within,” said Tuttle while introducing the first piece that Sidorskyi has choreographed for the company.

He joined Dance Alive last year, after dancing in the National Theatre of Ukraine, having earned the highest honor a dancer can receive, “People’s Artist,” while there.

Each dancer mirrors the other in perfect synergy to the fragile piano melody. Midway, Gomez steps through a black chiffon curtain, portraying the dark shadow, dancing swiftly into the center of the stage with acute precision in the strong role. The fluidity of the dancers continues to mesmerize the audience, and applause erupts from the crowd when it comes to a graceful end.

Later in the program, Sidorskyi returns to the stage to perform a captivating solo from “Apollo,” a dance by George Balanchine, which DANB will perform first in its “Aspire” program.  The piece relates to Aristotle, the ancient Greek philosopher who studied the meaning behind the good life.

Several duets in various styles grace the stage, from a lively tango, “Tango de Roxanne” performed by Julia Ponomareva and Alexsey Kuznetsov, a sultry rendition of “Carmen” by Yulia Pivotskaya and husband Roberto Vega, a spritely movement from “The Nutcracker” performed by Gretel Batista and Fhillipe Teixeira, “Spirits of the Forest;” and an ethereal execution of “Bailero” by Andre Valladon and Carla Amancio. 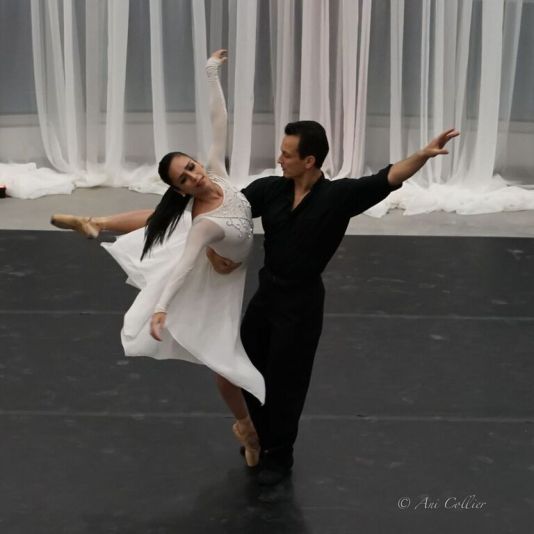 Meanwhile, Ani Collier choreographed a special duet for couple Jessie Dominguez-Reyes and Aaron Gomez, called “Close Your Eyes.” Collier, who grew up in Bulgaria while training in classic ballet, started working with Dance Alive in the ‘90s. Since then, she has choreographed profound pieces for the ballet and has captured the dancers’ exquisite talents with her innate ability to capture movement through a camera lens. 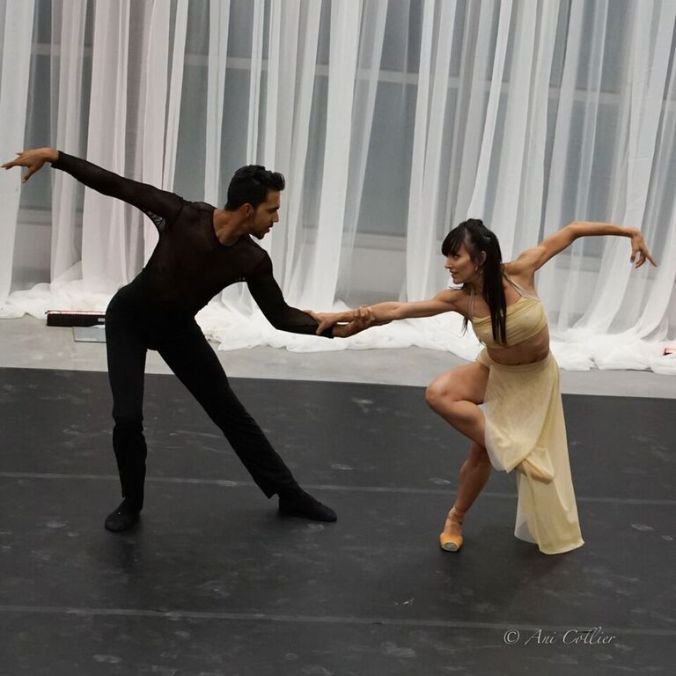 Skinner and Tuttle present Collier with the “angel award” later in the program, for her unparalleled support of their company.

Amidst the captivating duets, a solo performed by Ashley Brooke Lunn stands out, for its contemporary allure and compelling message. Brooke Lunn slinks onto the stage while local poet Lola Haskins begins to read her poem, starting with the words, “I am the invisible girl…”

They are performing a sample from “Waiting,” a four-movement dance that will be also performed during “Aspire.”

Skinner choreographed the dance after a photo series by Cindy Sherman, “Waiting,” inspired her when the contemporary wing of the Harn Museum opened several years ago. The photo series featured snapshots of people who were just waiting at the bus stop. As she stared at their eyes just looking out, she thought, “I just want to know their stories.”

Skinner collaborated with Haskins to dig into the depths of their identities through poetry. When Haskins finished the poems, Skinner thought “These are who the people are!” she says, and she crafted dances to match their intricate narratives.

As the first part of Haskins’s poem dissolves and the music fades in, Brooke Lunn, taking on the identity of a schoolgirl named Bernadette, blooms up from her chair and morphs to life, narrating the thoughts, dreams and inhibitions of her character with each seamless movement of her lyrical dance. When the music dissolves, and Haskins speaks the last few words of her monologue, Brooke Lunn melts back into the metal chair. 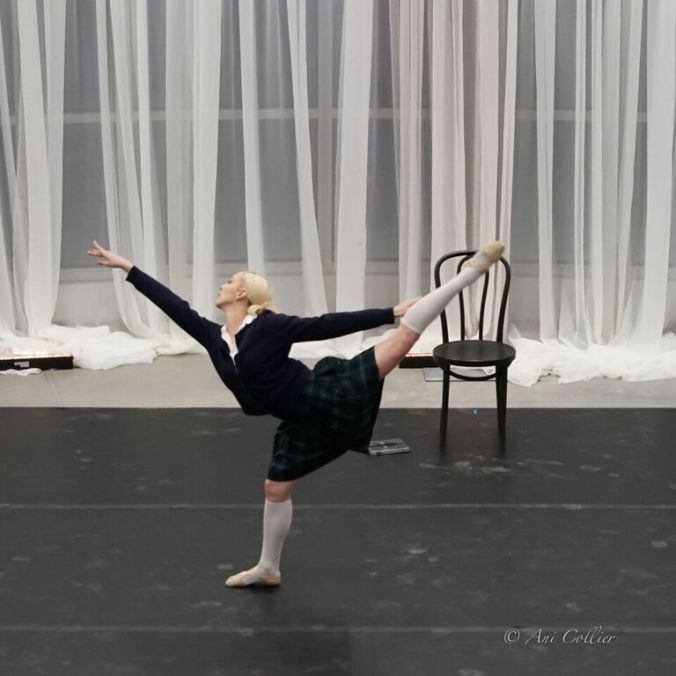 While this piece explores the complex conundrums of individual identities, another piece by Skinner in the “Aspire” program, “Who is Silent?” explores censorship.

Like the “Waiting” piece, artwork inspired the choreography for this dance. Particularly an image by Barbara Kruger, “made me just stop,” said Skinner.

Simple, yet bone-chilling, Kruger’s image, “Untitled: Who Speaks? Who is Silent?” shows metal scissors slicing through a block of text that reads, “Who Speaks?”

“When you look at it, we are dealing with dancers from Ukraine, Turkey, Cuba and Brazil, where there is political unrest,” said Skinner. “Without jumping up and down and making a political statement, we are in some way.”

One of Tuttle’s pieces, “Constellations” will close the “Aspire” program. The 25-minute piece, rife with soaring lifts and fluid partner work, promises to enchant any audience. Adding to the fantasy, projections of the stars, taken by the Hubble telescope, will sparkle in the background. 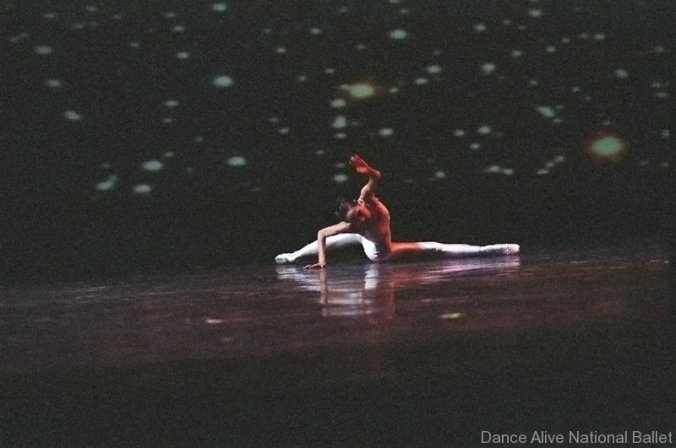 “Kim is really artistic,” said Brooke Lunn. “She hears the music, and she sees something already. When you get to work with her doing choreography, you can see that she has this vision.”

At “Meet the Dancers,” it is evident that the visions of Tuttle, Skinner, Collier and other artists have wooed the audience who give the group a standing ovation and applause that runs for minutes, with cheers sprinkled throughout.

In its few hours, the event showcased the caliber of talent, artistry and community that saturates the Dance Alive National Ballet’s culture. While words cannot truly do its exquisite performances justice, if this event is any indication, “Aspire” will truly be a treat to anyone who sees it on October 26th.

To purchase tickets for “Aspire” on October 26th, click here.

All Photos by Ani Collier